I have just finished readling The Protector by David Morrell for the second time. It was a great read the first and second time. However it was a distraction, a welcomed one from my current main project. What I am now going to call the David Kelly project. I need to get this screen play written and done before he dies! It is not a veiled threat, the man was born in 1929, so he is no spring chicken!

Also why when you buy tined soup do you see nice pictures of the fresh ingredients, but never a picture of the animals used?

So okay what do you do when your book is finished? It last two nights. Now I need to read soemthing else and would prefer not to have to read a tech manual out of boredom!!

When I was in school and learning about history, I always used to think of those in the early 1900’s, and wonder how life was so hard for them. Hard for me, more to point if I had to live then, knowing what I know now. My thoughts process really showed a lack of understanding for some things. Just because it was simple, difficult by my standards now. It was fine by their’s! So the lesson for today, shut up and think before I think like that again!

You would think being an IT oriented person that I would not be affected / infected, that my system would be bullet proof. Well you know that would be nice, but I am not the only one who uses my home computer. So today started out with the realization that something evil now lurked on my home computer. Only two days ago I removed a nasty program called WIN7, which is  fake anti virus program from someone elses computer, and now “Et tu Brute?”. Yes like poor old Julius who ate one too many smarties, my system was now infected.

Someone was nice enough to write a program which told my anti virus they were friends, and then started to grow on my system. I removed about 30 smaller programs it had seeded. It was lovely. As much fun as, well not sure. So if you think something can be gotten on the internet for free, beware, nothing is free. It comes with gifts, little ones that steal your data.

So the moral of the story is avoid P2P sharing sites, bit torrents and free music  downloads! No downloads unless you know the mother of the person who wrote the software OK! 🙂

Last night the web was alive with the news. Osama is dead. For some a breath of relief, for some a moment of justice, for others the culmination of almost 10 years of work. His death serves as a purpose for the politcal agenda of the government, “on our watch we got Bin Laden!“. Yet how does his death server the agenda of those who made Bin Laden look like a desk jockey, it would be ill advised to believe he was the worst, and in life what he could not achieve, in dead he may inspire. Now we need to be more vigilant. God Bless and be safe all!

2012 marks the 20th anniversay of my final year in secondary school (high school). Twenty years later and a whole continent away I try to remember the days where my only concern was, was, you know I am not even sure. These twenty years have brought many things to my life, weight, less hair to brush, a beautiful wife and six, soon to be seven amazing kids. So the question is do I go to it?

There are some days in my life that go well and then there are some which I wonder about. This evening I feel I was the star pupil at the Basil Faulty School of Parenting. For those not familiar this was a role reprised by the great John Cleese. In this role Basil was, well, how do we say, unkempt and not exactly the type of person you would want to take parenting classes from. When I feel I have failed as a parent I think of John Cleese.I believe my father was also a graduate from this same school. Which is why I believe I inherited his skills. My father is a good man, however there are days when there was more Basil than dad. Funny he and I used to watch faulty Towers together a lot. It seemed to be our show. I used to know the episodes word for word and would be able to mouth it as we watched it. I remember my mother telling me once how my father had watched an episode while I was away with my grandparents and my dad missed me.So tonight was my Basil night where I was not the parent I had wanted to be and was not as tolerant as I wanted to be. So tomorrow needs to be an improvement. 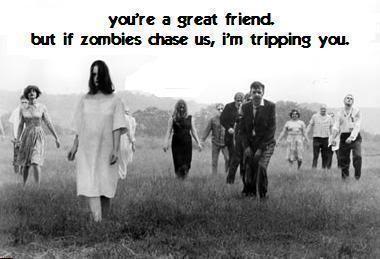 So to keep this as fun as we can get, I don’t have to be faster than the Zombies. I just need to be able to trip you up to get away from the Zombies!Wednesday was the twins birthday, 10 already! How time flies when you are having fun. They wanted a 10th Dr Sonic Screwdriver and the Dr’s Crash Set. So thanks to ThinkGeek this was a simple no brainer!!

Today is national free comic day. Liam was very excited for this. He had seen the ad at the local library, it was sponsored by Nite Flight Comics, where I buy my comics. The library opens at 10 AM. We got there around 10:30 AM.

The parking lot looked empty, hmmm. this was the first sign for me that this was not what it was going to be. Then we get in and I see the sign Liam told me about. Then we see the Free Comic. The look on his face was one of complete and utter disappointment. The comic was not quite what he had expected. I felt bad for him but did try to warn him.

While at the library Garrett found me a comic call Helm. It reminded him of me. It has a large guy in his Y fronts holding a sword above his head and wearing a norse helmet. Yes and he saw me. The comic was funny. You can see it here.

When library time was over I had to go to a funeral. Had to is a funny expression, I wanted to go to a funeral. That sounds even funnier. But a friend of mine, their mother died, their brother had died a few weeks earlier and then another brother a little while before that. It made me feel very mortal and wonder how I will be remembered.